Note: all images can be clicked on to see the full size version

This is an update to an original post from Feb 2015 (see here for original). In that prior post I had been able, for the first time ever, to bridge the Atlantic and discover where my grandmother’s mother was from in Europe (she is pictured on the far left above). She was from a very small village in Slovakia now called Nový Ruskov, which in 2005 still only had under 700 inhabitants (reference this translated Slovakian website for the various names of this village throughout history). This post expands on the prior post with the discovery of more generations and more family. For reference, this was the depth of my knowledge for this branch of the tree two years ago: 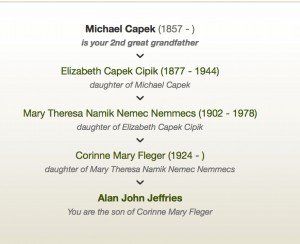 When I started this genealogy site I had hoped to accomplish more than informing my extended family on what I was discovering in my research. I had hoped that – upon occasion – a distant relative might find the site and help provide more new information.

Recently, that partially became true. In the last month we had someone register on the site who is a distant cousin, and it turns out we share the same great-grandmother – Elizabeth [Capek] Nemec. This long-lost cousin is descended from Elizabeth’s oldest child, Michael Capek. We do not know the story of Michael’s father, who was from Slovakia where Michael was born. Nor do we know why there was no marriage (Michael’s last name is Elizabeth’s maiden name). Unfortunately, this distant cousin knew less about that branch of the family than I did – which was very little to begin with.

What I do know is that when I began communicating with this cousin, who grew up and lived in Cleveland, I tripped over some additional information gleaned from Slovakian Church records. He had asked me to provide what I knew, and in doing so I discovered a treasure trove of data that has led to extending our family back a few more generations. And there was one more surprise which I will touch on at the end, but will expand upon in another post.

So what I learned from pulling together the information for my distant cousin was initially just seeing the data I had in a new light.  As I noted in the prior post, it was the World War I draft card for Michael Capek that gave me the lead to Nový Ruskov, Slovakia in the first place. Michael had been quite precise in listing his origin of birth, as can be seen in the image below. 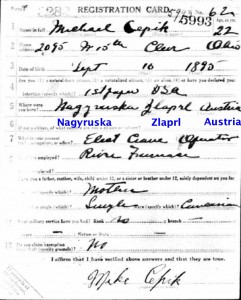 Nagyruska (Lesser Russia) was the name of Nový Ruskov (New Russia) back at the turn of the 2oth century. It is located in the Trebišov District of modern Slovakia. But back in the year 1900, it was part of the Zemplén County in the Kindgom of Hungary, part of the Austrian-Hungarian Empire (which would be dissolved by the end of World War I).

In addition, I had another data point to work with – the name of Elizabeth’s father from her 1944 Ohio death certificate: 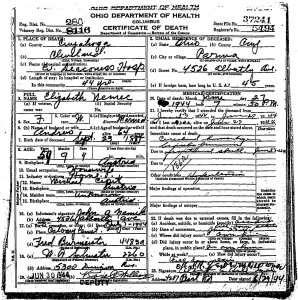 It turns out that Michael Capek, grandfather to my long-lost cousin and half brother to my grandmother, was named after his grandfather Michael “Cipik”.

So with Michael’s birth date and village name from a World War I draft card, plus the name of his grandfather from his mother’s death certificate, I was able to research Slovakian Church records that were on the Ancestry.com and Family Research websites. By varying the spelling of Capek to what we see today in Slovakia (e.g., Cipik, Capak, etc) I began to discover more of our ancestors.

The first record I discovered was the following:

Prior to all this I had estimated that Michael “Cipik”, father of Elizabeth, would have been born around 1864 (20 years prior to her birthday). When I discovered this record it lined up both in time (1861 vs 1864) and space (Veľký Ruskov, which was another name for Nový Ruskov). So I am very confident that this is the baptism record for our collective Great-great grandfather.

And of course, it identifies our Great-great-great grandfather and grandmother, who would have been born circa 1840: Michael Capak and Anna Jancscsik.

This extends this branch back one more generation, but also provides us a solid genealogy record for a birthplace and date for our Great-great grandfather, “Michael Capak”. Now this ancestral branch is a little longer and has more defensible dates. 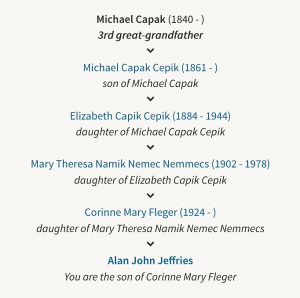 As I was wrapping up the information for our distant cousin, I happened to glance something on that translated Slovakian website that covers all the towns and villages of Slovakia. The screen snap below highlights two areas on the site for Nový Ruskov – that tiny village of <700 souls  – containing the top surnames from the 2005 phone book: 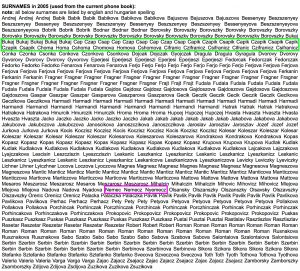 This is how genealogy sometimes works – something catches your eye and a whole new world opens up. Will expand on what I found about the Nemecs in a separate post, coming very soon.

Update: Decided to end this post with a picture from the village of Nový Ruskov

One thought on “The Cipeks of Slovakia (Part 2)”