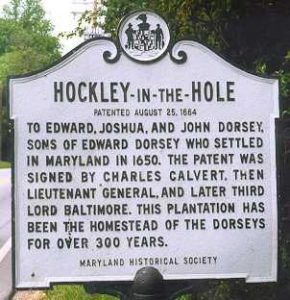 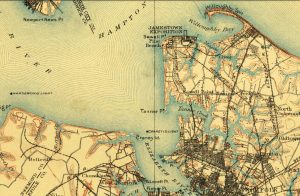 You can see Sewell’s Point in the middle of the map, with Tanner Point due south. Today this area is primarily encompassed by the Norfolk Naval Base. The picture below is looking east at the area between the two points showing the docks of the naval base. You can see Willoughby Spit in the distance to the left: Back in the early 1600’s this area was home to many very famous settlers of Virginia and Maryland. Regional names such as Willoughby, Sewell and Tanner established themselves in this region, along with families named Howard, Norwood, Dorsey and others. The early history of this area is succinctly described here:

Many of those sent were murdered by the Indians in 1622. Robert Bennett and John Howard were among the number.

Richard Bennett, in 1642, came over in person to revive the company’s efforts. He brought with him members of an Independent Church in England, who sought a more favorable field for building up their church.

Upon organizing in their new homes surrounding Edward Bennett’s plantation upon the Elizabeth river, in Nansemond County, Philip Bennett, a nephew, was sent to Boston to secure ministers. He carried with him a letter written by John Hill. Rev. William Thompson, a graduate of Oxford, John Knowles, of Immanuel College, Cambridge, and Thomas James were induced to come. Upon their arrival in Virginia, they were coldly received by Governor Berkeley and his chaplain, Rev. Thomas Harrison. Through the Governor’s influence, an act was passed by the Virginia legislature forbidding any minister, who did not use the “Book of Common Prayer,” to officiate in the churches of Virginia.

The ministers from Boston soon retired from this unpromising field, but to the disgust and surprise of the Governor, his own chaplain, Mr. Harrison, announced his determination to take up the work just laid down.

The church had been built in 1638 upon “Sewell’s Point,” on the Elizabeth river.

This was the first church of Norfolk:

The opposition of the new arrivals to Virginia continued to build, and by 1650 many of the settlers in this area were enticed to settle in Maryland. From the Dorsey Family book:

By the year 1648, freedom of worship in Virginia had been prohibited and life there became less attractive. As a result, many settlers turned to the newly erected County of Anne Arundel in Maryland, where alluring inducements to obtain land were being offered, and where freedom of worship was said to be guaranteed. Among those who went, were Edward Dorsey, John Norwood, Matthew Howard, Thomas Todd, and Nicholas Wyatt.

This religious tension in the colonies reflected tensions broiling back in England. To the point where, in the beginning of the 1650’s, the colonists now in Ann Arundel would become caught up in a smaller version of the English Civil War. I hope to post more on that conflict later, since it ensnared many of our family branches.

Here is brief overview of the events that led to Edward Dorsey (the immigrant) moving to the Severn River:

The first European settlers arrived in present-day Anne Arundel County in 1649. Seventeen years earlier, King Charles I signed the Charter of Maryland granting the colony to Cecil Calvert, the second Lord Baltimore. Cecil Calvert and his father, George, who died two months prior to the charter, envisioned the colony as both an economic enterprise and a place where fellow Roman Catholic royalists could escape the religious strife that was increasingly prevalent in England. After the death of his father, Cecil Calvert was materially aided in his enterprise by his father-in-law, Thomas Arundell, first Baron Arundell of Wardour. A wealthy and influential Catholic, he was able to fulfill his dream of establishing a colony in North America through his son-in-law. In 1642 the English Civil War broke out between the Roman Catholic royalists supporting Charles I and the Protestant Parliamentarians. Cecil Calvert, whose patronage came exclusively from the monarchy, became understandably concerned about his ability to maintain control over his colony. To solidify his position, he took several steps that would prove pivotal in the history of the Maryland Colony and what would soon become Anne Arundel County.

In 1649, the year Charles I was beheaded, the Maryland General Assembly enacted “An Act Concerning Religion” which legislated some degree of religious protection to all Christians. He also replaced the Catholic Acting Governor Thomas Greene with the Virginia Protestant William Stone with the understanding that Stone would help populate his colony. Stone approached a group of nonconformist Virginia Puritans and offered them land and guaranteed freedoms in Maryland. In December of 1649 the first European settlement in Anne Arundel County was founded by these Puritans on the north shore of the Severn River opposite present-day Annapolis. It was called Providence.

Edward Dorsey the Immigrant was supposedly a shipwright, which would be a very needed skill along the Chesapeake Bay. Mention of him is sparse among the early records of Virginia and Maryland, but we do know he established a plantation with the unique name “Hockley-in-the-Hole”. Speculation abounds on how this name relates back to the English roots of the Dorsey’s of Maryland.

There is a reference to a “Hockley-in-the-Hole” in London, but what we find it to be a bit of a dodgy place in the mid to late 1700’s:

This place was formerly one of those infamous localities only equalled by Tothill Fields, at Westminster, and Saffron Hill, in the valley of the Fleet. It was the resort of thieves, highwaymen, and bullbaiters. Its site was marked by Ray Street, itself almost demolished by the Clerkenwell improvements of 1856–7. The ill-omened name of Hockleyin-the-Hole seems to have been derived from the frequent overflows of the Fleet. Hockley, in Saxon, says Camden, means a “muddy field:” there is a Hockley-in-the-Hole in Bedfordshire; and Fielding makes that terrible thief-taker, Jonathan Wild, son of a lady who lived in Scragg Hollow, Hockleyin-the-Hole. In 1756 this wretched locality was narrow, and surrounded by ruinous houses, but the road was soon after widened, raised, and drained. In 1855 the navvies came upon an old pavement near Ray Street, and oak piles, black and slimy, the site of a City mill.

Also in the same vicinity is Clerkenwell, which has a much more refined past:

The legends and traditions of this most ancient and interesting district of London all cluster round St. John’s Gate (the old south gate of the priory of St. John of Jerusalem), and the old crypt of St. John’s Church, relics of old religion and of ancient glory.

Brave as the Hospitallers of Clerkenwell always remained, they soon, we fear, grew proud, avaricious, and selfish. Edward III. had to reprove the brotherhood for its proud insolence. When Henry III. threatened to take away their charter, the prior told him that a king who was unjust did not deserve the name of monarch. In 1338 the English prior, Thomas l’Archer, raised £1,000 by cutting down woods round all the commanderies; he also sold leases and pensions for any terms of ready money, and by bribes to the judges, he procured for the order forfeited lands of the Templars.

Every preceptory of the Hospitallers paid its own expenses, except that of Clerkenwell, where the grand prior resided, and had many pensioners to support, and many courtly and noble guests to entertain. In the year 1337 this priory spent more than its entire revenue, which was at least £8,000.

In 1212 King John, that dark and malign usurper, spent a whole month at the Priory of St. John, feasted by the prior, and on Easter Sunday, at table, he knighted Alexander, the son of the King of Scotland, a ceremony which cost young Sandy £14 4s. 8d. In 1265 Prince Edward and his loving wife, Eleanor of Castile, were entertained here. The prince had married his wife when she was only ten years of age, and on claiming her, at twenty, came to St. John’s Priory for their honeymoon. In 1399 we find Henry IV., not yet crowned, coming down Chepe to St. Paul’s, and, after lodging with the bishop for five or six days, staying a fortnight at the priory. In 1413 King Henry V., that chivalrous king, says the Grey Friars’ chronicler, was “lyvinge at Sent Jones.”

Needless to say, this area in London looks to have been once a place to visit by the powerful of England. In fact (referring back to the reference for Hockley-in-the-Hole in London) we find this was also a place for warriors to learn their craft:

On the site of the “Coach and Horses,” in Ray Street, once stood the Bear Garden of Hockley-inthe-Hole, which, in Queen Anne’s time, rivalled the Southwark Bear Garden of Elizabethan days. Here, in 1700, the masters of the noble science of self-defence held their combats.

Hopefully in a future post I will be able to explore the Dorsey roots back to England.

Returning to Maryland, we see how these Puritans of Point Sewell established their estates along the Severn River, as can be seen in this reconstruction of the early land patents (click image to see larger view): 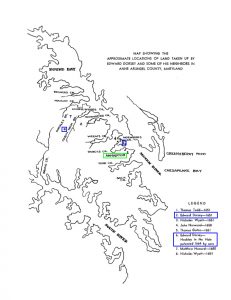 Edward Dorsey the Immigrant drowned on August 2, 1659 off Kent Island, which is located on the opposite side of the Chesapeake Bay from current day Annapolis.  He had three sons, two of whom became famous in the annals of Maryland and actually helped establish Annapolis.

Edward’s second son was the Honorable John Dorsey, who inherited Hockley-in-the-Hole in 1683 from his elder brother. John Dorsey was a commissioner for the development of Annapolis and sat on many important committees on the Lower House of the Assembly. He was advanced to the Upper House until his death in 1714.

One of his sons was Caleb Dorsey, who began a line of “Caleb Dorsey’s” who established themselves in Elkridge MD. In an interesting twist, this parallel line of Dorsey also ends up in West Virginia near our line.

Our family line traces back to the eldest daughter of the Honorable John Dorsey, Deborah. She goes on to marry into the Claggett line, who make their way to Taylor County WV in the early 1800’s. The full line from Edward Dorsey to my family is (click to enlarge):