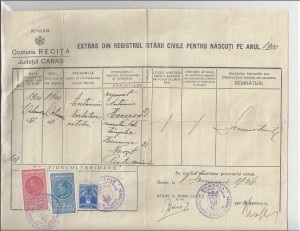 Up until recently, this is all we knew about the Herzcog line of my great grandfather. But before we get to the Herzcog story, let me close the loop on my great grandmother’s lineage: the Naszt and Hollenschwandner lines.

We already knew more about the Naszt lineage than the Herczog lineage. For example, we know “Hermine Naszt” (the middle) in the birth certificate above was the daughter of Hermine Hollenschwantner (the elder), as well as the mother of Hermine [Fleger] Felmer (the younger). The three generations of “Hermine”!

We also know Hermine (the middle) Naszt had two brothers: Felix Naszt (twin ) and Bela Naszt (younger), both of whom immigrated to Cleveland. Below is a picture of the brothers Naszt (back row, center and right) with Joseph Fleger (back row left and my grandfather’s adopted father). My grandfather is the child in the front row: My grandfather’s  grandmother (Hermine (the elder) Hollenschwantner) married a second time (or so we thought) when she migrated to America in the early 1900’s. From this “2nd” marriage we learn Hermine Hollenschwantner’s parents were Albert Hollenschwanter and Barbara Nekved:

This is all we knew about the Naszt/Holleschwandner lineage.  Some names with only one location – the location of the birth of my grandfather. On the Family Tree Page of this site I had this image of my grandfather’s very sparse family tree (my grandmother’s tree is even sparser!): 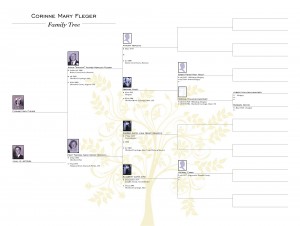 One of the new  pieces of  information that just surfaced  at Ancestor.com was the Marriage Certificate from Hermine (the elder) Hollenschwanter’s first marriage. This record provides supporting data on her parents, plus new data on her husband and his parents. Here is that certificate from newly released Romanian records:

Now let’s see where this record can lead us …

Some key data from the record: Petrus (Peter) Naszt was 27 in 1877 when he married Hermine Hollenschwanter on August 20th of that year.  That gives us a birth year of about 1850 for Petrus/Peter Naszt. Hermine was only 20 years old when they married.

Petri Naszt’s parents were Mathias Naszt and Franciscæ Nesaschek. Most importantly, in the “origins” column for Petrus Naszt is the word “Lugos”, which would seem to be a reference to the city of Lugoj, in Timiș County, Banat Romania:

Lugoj (Romanian pronunciation: [luˈɡoʒ]) is a city in Timiș County, Banat, western Romania. The Timiș River divides the city into two halves, the so-called Romanian Lugoj that spreads on the right bank and the German Lugoj on the left bank.

This makes sense since Timiș County is adjacent to Caraș-Severin County, in which lies Reșița – the county seat and where Anthony Alfred Hercog Fleger was born (click to enlarge):

In 1880 Felix Naszt was born to Peter and Hermine (the elder), followed by Hermine Naszt (the middle) [now I know Felix and Hermine were twins] and Bela Naszt in 1882. Sadly, Petrus Naszt died on the 4th of December 1887, per another new record on Ancestry.com:

The record reaffirms Peter Naszt hailed from Lugoj. He was only 36 when he died of pneumonia. Unfortunately, on the Naszt line this is all we have at the moment.  I hope to update this section in the near future as I continue to search through the new Romania records.

Again, from the marriage record above we learn of the “origin” of Hermine (the elder) Hollenschwantner, which appears to be the name “Franzdorf”.  Family lore (and many records) hint our family roots are in Germany, most likely down the Hollenschwantner line. But this has never been confirmed.

Valiug is a small village in Caras-Severin Romania. Using Google translator, this is what I could find on Valiug (note: “dt.” = Duetsches = German, which means the German name of the village is/was “Franzdorf”):

Văliug (dt. Franzdorf, ung. Ferenczfalva) is a municipality in Caraş-Severin County, Banat, Romania. It is located in the valley of the river Bârzava in 550 meters above sea level, in the Banat Mountains, at the foot of the Semenic Mountains.

Franzdorf was founded in 1753 by the establishment of 71 German families from the Salzkammergut in Austria, who had been called by the Territorial Administration management to be active in the carbon [editor: charcoal] production. The coal was for the steelworks needed in Resita. The settlers were consequently mostly Köhler [charcoal makers] by profession. They gave the place the name Franzdorf [in honor to] Francis I, Emperor of Austria and 1792-1835 King of Bohemia, Croatia and Hungary. [In] 1795 arrived Romanians from Oltenia [who] before the Turks had fled, and settled in the village. They built their houses on the mountainside above and below the German settlement.

The rapid development of industry in Resita necessitated the construction of a paved road for the wood or charcoal transport. So the road [between] Văliug-Resita in 1802 [was] built. [In] 1803, in the district Hommerschupfen, the first blast furnace [was] in operation. [In] 1855 [a] street [between] Văliug- Wolfsberg [was] built, this [was extended in] 1899-1903 to Slatina about Brebu Nou (dt. Weidenthal) , which access by Caransebeş and Băile Herculane (dt. Herkulesbad) enabled. All this meant that new workers were employed. Between 1858 and 1859 a further 40 German families from Austria were settled.

The records of “Hollenschwandners” in Valiug/Franzdorf stretch back to a marriage record from 1834 (Mathias Holleschvandner to Rosalia Per). Mathias appears to be from Valiug/Franzdorf and born in 1811. There may be other family members with even earlier connections.

It is interesting to note that the Hollenschwandners begin to appear in large numbers in Rescita after 1855, after the road to Valiug was built.  So we can assume there was a migration from Valiug to Rescita.

What this means is we may be able to extend the Hollenschwandner line back to the early 1800’s. It will take months to build out the family tree  from all these new records, and then connect it to Albert Hollenschwandner, Hermine’s (the elder) father.

But I was able to discover three brothers of of Hermine (the elder):

It was also interesting to discover Micheal “Holschwandner” had four children, three of whom migrated to Pennsylvania in 1907 (one daughter and two sons). It was the 1907 passenger ship list and the 1910 census record for sons Micheal and Albert that led me to some of the alternative spellings of the last name in Romania. Another interesting fact that arose was another marriage certificate from Romania. I learned that Hermine (the elder ) [Hollenschwantner] Naszt did marry a 3rd time (even though her Ohio marriage record clearly claims only one prior marriage).  The new Romanian record would be her 2nd marriage.

Apparently Hermine (the elder) married Sigmund Szabo in September of 1888, one year after her first husband – Peter Naszt – passed (she was 31, Sigmund was 27).  Sadly Sigmund Szabo dies in 1889, after only about a year of marriage.

So now let’s finally get back to that Herczog line.

Herzog is a German hereditary title held by one who rules a territorial duchy, exercises feudal authority over an estate called a duchy, or possesses a right by law or tradition, to be referred to by the ducal title. The word is usually translated by the English duke and the Latin Dux.

Thus Herzog was a title borne by Germanic warriors who exercised military authority over a tribe by general acclaim among its members or warriors,[1] especially in the stem duchies. During the medieval era, some of the most powerful vassals whose territories lay within the boundaries of the Holy Roman Empire took or were granted the title of Herzog by the Emperor. Several dynasties, such as the Habsburgs of Austria, Hohenzollerns of Prussia, Welfs of Hanover, Wettins of Saxony, Wittelsbachs of Bavaria and the House of Württemberg, held the Herzogswürde (dukedom) before becoming kings.

While “Herczog” as a surname does not imply any special connotations, it can imply service to a Duke or Dukedom. Our family lore indicates there was some political leadership in our past – a Burgermeister or Mayor. But down which line is unclear.  That is the extent of what we know about the name, so let’s research the new records – the first being the marriage certificate of Hermine Nazst and Antonin Herzcog:

Here is the key information from this record:

The record indicates Hermine’s (the middle) birthday as January 2nd, 1880, but we know from other records this should be 1881. [Note the update at the top of this post were the mystery of the dates was resolved] I guess the fact Hermine Herczog (the younger) was born in January 1898 (less than 9 months after the August wedding of her parents) might have something to do with the discrepancy in age.  I would assume the legal age for marriage might have been 16 in this place and time in history.

Antonin’s parents (my great-great grandparents) were Rudolph Herczog and Caroline Malteth. From this record we learn Antonin was born on January 18th, 1874.  Antonin was 23 on his wedding day.

And to set one piece of confusion aside, all the records from Romania indicate Antonin Herczog (as well as the Naszts and Hollenschwanders) were Roman Catholic.  This form of the name Herzog does not have Jewish roots, as some have claimed.

Antonin’s origins are listed as “Kiraly-kegy”.  “Kiraly kegye” is Hungarian for “King’s Mercy”.  It is also the name of a village in Caras-Severin:

Tirol is located in the Romanian Banat, 80 km southeast of the capital city of Banat Timişoara in the county of Caras-Severin. Other cities near the small town Bokschan (Bocsa) and the industrial city of Resita (Resita) are. The village lies on a low altitude of 176 m, where the mild climate favors the fruit and wine.

The town was established in 1810 after an uprising and later peace agreement.  I have not been able to learn much more, yet.  But there are numerous historical names to research. Here is Kiraly-Kegye/Konigsgnad/Tirol in relationship to our other ancestral homes in the region: 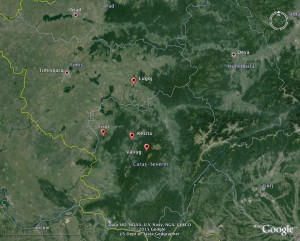 From these newly released records, we have gone from a very sparse family tree for my grandfather, to a much more populated and in depth tree.  I hope to be able, in the coming months, to fill in the details more and push our “Fleger” ancestral line back to the opening of the 1800’s.

But until then, here is our new expanded family tree: 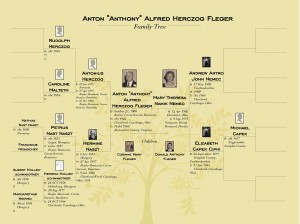 [Please note some of the birthplaces are still out of date (e.g., Hermine Hollenschandner still lists “Oldenburg, Hungary”.  I need to update this to the latest information, but decided it would be better to get the post out for the family to enjoy than worry all the details.]