While my wife and I both appear to each have some Indian ancestry,  it is not surprising to find some of our family branches had different kinds of “Indian encounters” – given we are primarily of European descent.

I have been told stories by other “family genealogists” of family ancestors being captured by Indians, who later escaped. So of course I wanted to find out if these stories were true and what more I could learn.  This post focuses on the stories from my Father’s line. My mother’s family immigrated around 1900, so there are no Indian stories down that path. There are many other Indian stories to be told on my wife’s family lines, but those will be in later posts.

The first event I confirmed was that of Nathaniel Cochran, who was born February 7th, 1757 in Philadelphia, Pennsylvania. Being a historical figure in the Indian Wars of Virginia and the American revolution, a lot is known about Nathaniel Cochran:

Nathanial Cochran was born near Philadelphia of Irish parents. He came to Marion county, Virginia (later WV) in 1774 at the age of 18. In 1776 he enlisted in a Virginia Company to serve as a soldier, and was attached to Captain James Booth’s Company of Scouts and Rangers.

The company was stationed on Coal Run to watch and keep the Indians from killing white settlers. On 16 Jun 1778 Nathaniel and Capt. Booth were hoeing corn on Booths Creek (about three miles from Monongah, WV) when Shawnee Indians killed Booth and captured Nathaniel. Nathanial was wounded; one bullet passed thru the flesh of his breast, (not a serious wound) while the another passed thru the flesh of his arm below the elbow. The Shawnee [held] him for some time, taking him to Ohio, Detroit Michigan, then back to Ohio before going on to Niagara Falls where he was sold to the English. He was held in prison at Quebec Canada until exchanged at the end of the war and returned to Marion County on 10 Feb 1783, five years after being taken captive.

[Editor: there are editorial clean ups to original text]

Another variant on the story with different details:

Nathaniel was taken captive by the Shawnee in 1778 and paraded through their villages in the Ohio Country.  In the spring of 1779 he was taken to Montreal and sold to Henry “the Hairbuyer” Hamilton.  During the winter of 1781, Nathaniel and five other prisoners tried to escape from Quebec and the British with the help of a French Merchant.  All six prisoners were recaptured and returned to the British.  The British then arrested the French merchant. In the summer of 1782, Nathaniel and several other prisoners were exchanged to the Americans in exchange for some British officers. In 1783, Nathaniel returned to his home in Western Virginia.

Here is a picture of the monument to Nathaniel Cochran, and a new plaque of the original inscription [click to enlarge] 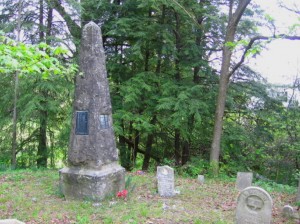 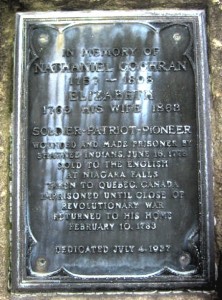 There is a historic marker in Boothsville WV to recognize the event: Here is the lineage between myself, my father and Nathaniel Cochran: 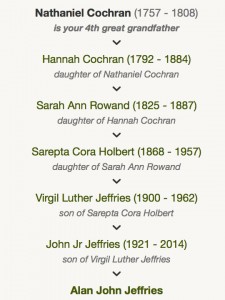 Nathaniel went on to be an original settler of what is now West Virginia.

The second set of ancestors I have found documented evidence on are actually three individuals who were attacked during King Philips War in New England (1675–78). The location of the attack was Littleton CT, which was near one of the Indian Praying Towns established by John Eliot called Nashoba:

Littleton was first settled by white settlers in 1686 and was officially incorporated by act of the Massachusetts General Court on November 2, 1714.

The town was also the location of the sixth Praying Indian village established by John Eliot called Nashoba Plantation, on the land between Lake Nagog and Fort Pond. Daniel Gookin, in his Historical Collections of the Indians in New England, (1674) chapter vii. says:

Nashobah is the sixth praying Indian town. This village is situated, in a manner, in the centre, between Chelmsford, Lancaster, Groton and Concord. It lieth from Boston about twenty-five miles west north west. The inhabitants are about ten families, and consequently about fifty souls.

At the time of King Phillip’s War, the General Court ordered the Indians at Nashoba to be interned in Concord. A short while later, Concordians who were hostile to the Nashoba solicited some Militia to remove them to Deer Island. Around this time, fourteen armed men of Chelmsford went to the outlying camp at Wameset (near Forge Pond) and opened fire on the unsuspecting Nashoba, wounding five women and children and killing outright the only son of John Tahattawan, a boy twelve years old.

The family members in the attack cover two families in our lineage – the Powers family and the Shepard family. Two of the Shepard brothers (sons of Ralph Shepard and Thank-the-Lord Perkins) were out working on the family homestead. They had asked their 13-15 year old niece Mary Powers (daughter of Walter Powers and their sister Tryall Shepard) to stand watch. But the Indians were too stealthy for the young look-out:

On Saturday, Feb. 12, 1675, the sons Isaac and Jacob were killed by the Indians on the south side of Quagana hill. They, at the time, were threshing grain in the barn on the Shepard homestead. Being aware of the perilous times,—this was during King Philip’s War—the sons had set their sister (niece?) Mary on the summit of the hill to watch for Indians.

The ground was covered with deep snow and the Indians traveled with snowshoes. Eluding the vigilance of Mary who was only about thirteen years old, they swooped down up on the Shepard barn before she was aware of their presence and slew Isaac and Jacob.

She was taken captive and carried to Nashawa,—now called Lancaster, or some place in that vicinity. During the first night after her capture she escaped and reached home the next morning. In the dead of night, Mary took a saddle from under the head of her Indian keeper who was sunk in sleep increased by ardent spirits, put the saddle on a horse which the Indians had stolen at Lancaster, mounted it, swam it across the Nashawa river, rode through the forest to her home.The leader of the Indian band is supposed to have been Netus, sometimes called Nipmuck Captain.(Ancestors and Descendants of Albro Dexter, p, 27-28)

The History of Concord also told the story:

The place of the tragedy was on the south side of Quagana Hill, and the persons slain and captured were children of Ralfe and Thanklord Shepard who went from Malden near a place since called Bell Rock to Concord village, where he bought of Lieut Joseph Wheeler of Concord 610 acres lying in the form of a triangle between the Indian plantation of Nashoba and that part of Chelmsford which is now Westford; Nagog pond forming the base of the triangle, the apex being two miles one-quarter and sixty rods north from the southwest end of Nagog pond.

When the Indians swooped down upon the Shepard homestead the ground was covered with snow to such a depth that snow shoes were used. The event happened on Saturday, and Isaac and Jacob were threshing in the barn. Being aware of the perilous times, they had set their sister on the summit of a hill to watch for Indians; but the savages eluded her vigilance and before she was aware of their presence she was captured and her brothers were slain.

Tradition does not inform us just where the girl was taken to; some think it was in the neighborhood of Lancaster, others that it was as far off as Brookfield, but wherever it was she soon escaped and returned home. Hubbard in his narrative of the Indian wars says of Mary Shepard that “she strangely escaped away upon a horse that the Indians had taken from Lancaster a little while before. Tradition asserts that she escaped during the night following the day of her capture and arrived home the next morning.

Rev. Edmund Foster a former minister of Littleton in a “Century Sermon” preached in the year 1815, stated concerning the event that tradition says the girl was carried by the savages to Nashawa, now called Lancaster, or to some place in the neighborhood of it.

Samuel Gardner Drake in his notes on the “Old Indian Chronicle” says that the leader of the band who slew the Shepard brothers is supposed to have been Netus, the same who attacked the Eames family, and who was sometimes called the Nipmuck Captain. Netus was slain the 22nd of March following, by a company of men from Sudbury, who with some soldiers from Marlboro found him asleep with a company of Indians around their campfire. Foster says that in the dead of night as related by tradition, Mary Shepard took a saddle from under the head of her Indian keeper when sunk in sleep increased by the fumes of ardent spirit, put the saddle on a horse, mounted him, swam him across Nashawa river, and so escaped the hands of her captors and arrived safe to her relatives and friends.

Emphasis mine. There is a marker in Littleton recognizing the event: 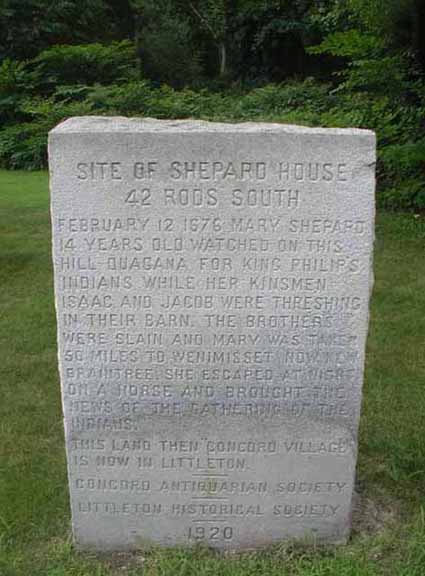 Mary Powers goes on to marry Lt Joseph Wheeler, who I believe is the Nephew of the Joseph Wheeler who sold the Shepard family their land. Deacon Ralph Shepard and Thank-the-Lord Perkins – who lost two of their sons in this attack – are my 10th great grand parents as shown in this lineage from Deacon Shepard to me:

In this lineage we also find Mary Powers. She is not only the granddaughter of Ralph Shepard, but my 8th great grandmother as well.

As I hinted in a prior series of posts on our New England Heritage (Part 1, Part 2, Part 3, Part 4, Part 5) The Shepard and Powers families had a very unique relationship with the Indians of Nashoba Praying Town

After settling in Concord Village (now Littleton, Mass.), Walter worked for Ralph Shepard, a Puritan minister who escaped religious persecution in England. After six years (about the time it took to work off the cost of forced transportation from Ireland), Walter married his master’s daughter, Trial Shepard. County records list the date on “ye eleventh day of ye first month, 1660, to Trial, daughter of Deacon Ralph and Thankes.”

Walter established a family household and sawmill on a tract of land that consisted of one fourth of the Indian village of Nashoba. Walter obtained this land from his former master and now father-in-law, Deacon Ralph Shepard, who purchased the whole village of Nashoba from Thomas Waban and other Indians.

Waban was the first documented Indian to be converted to Christianity:

Waban was born about 1604 at Musketaquid, near the present town of Concord. His conversion to Christianity came on October 28, 1646 (Julian calendar), when the missionary Reverend John Eliot preached his first sermon to Native Americans in their own language in Waban’s large wigwam in Nonantum, Massachusetts, and Waban and many of his tribe were converted.

Waban maintained close and friendly relations with the white settlers of Massachusetts and, in April 1675, reported to an English magistrate that trouble was brewing amongst the Wampanoags. Within two months, Waban’s predictions came to pass when a Wampanoag named Metacomet, known as “King Philip,” led his nation in the initially successful King Philip’s War. Metacomet’s subsequent death in August 1676 signalled the end of the brief war, and the rebellion soon collapsed due to a lack of leadership.

The “Thomas Waban” mentioned above is likely Waban’s son.

Update: Another documented historical hint comes from the marriage record of Joseph Wheeler and Mary Powers. The full text of the record indicates both the Powers and Wheeler (and therefore presumably the Shepard) families lived in the Nashoba[h] Indian Town:

A screen capture of Ancestry.com details: 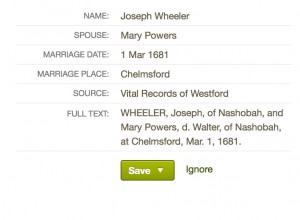 So there we have it, the two incidents I have found to date of ancestors being attacked and taken captive by Indians, to later escape or be released and live full lives.